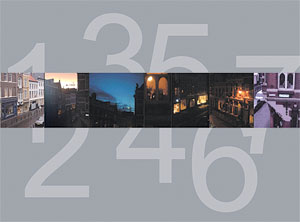 Molenstraat is a real place, located in the Dutch capital of The Hague, and it was the place where this album was recorded live throughout an evening from dusk to dawn.

However, molenstraat is also a virtual place; somewhere I can drift away, leaving the stresses and strains of modern life behind me for an hour.

The most striking aspect of this album is the way in which the intended space and tranquillity effortlessly translates through the music, leaving me with an innate sense of where molenstraat is.

" ... a brilliantly emotive album that takes it's time to unfold and paint a picture of mood and feeling on both a personal and environmental level ... "
reviews
scott kelly
stars end

A single trip from evening to morning is chronicled on the album Molenstraat, by Eric t' Sas and Matthew Florianz. The seven pieces presented are extracts from a long improvisation, performed over the course of one night and morning in an apartment in The Hague. The tracks, named after the time of day at which they were recorded, present a rich variety of moods even as the artists work with a small palette of keyboard textures.

Ripples of melody and a thoughtful piano solo open up the first and best piece, Molenstraat 16:30. Live street noise is mixed in from time to time - shouting children, thunderclaps, and the grumble of wheels turning on the stones below. The listener drifts into deep contemplation during the blissful two tracks that begin the disk, imagining a city full of people hurrying to their homes, turning their backs on the dusk and thinking of sleep. Molenstraat 19:28 moves into darkness, a somber piano phrase couched in dark, threatening drones. Through careful melodic twists and turns, the nighttime segment of the album imparts the emotions of a long and sleepless night - introspection and languor with pieces of fear and loneliness. Melodic themes from the start of the disc return on the uplifting conclusion Molenstraat 07:33 - the distant ringing of bells tell us to get up and begin a new day.

Molenstraat gives the listener a sparse and beautiful assortment of music, played with restraint, crystallizing a place and time in our minds, even though it may be far away.

Recorded in an apartment on the Molenstraat in The Hague, Netherlands this collection has an entrancing,improvisational feel. Gentle street sounds, voices and footsteps fix the location in the listener's mind and the overall mood is night with the progression of the evening towards dawn. As evening falls the first track features a delicate interplay between piano and synth, a tender beginning.

The next couple of tracks are moody and slightly more intense with a darker feel. The tension builds with each track and close listening reveals well crafted layers of sound, with occasional piano and stringed instrument sounds.The listener's emotions change as night gives way to dawn. This is great music for introspection and self-consultation. Production values are excellent and the mix is deceptive and spellbinding. Like all great music this feels deep, honest, and effortless. These two artists have constructed a superb beatless landscape,a place of solitude to confront loneliness, isolation, and one's existence. It's an avenue we all must explore. See you on the Molenstraat!

Captured live as it appears on the CD, Molenstraat was recorded between sunset and dawn on a single night from an apartment on Molenstraat in The Hague. Representing a sequence of gently unfolding soundscapes.

Both t' Sas and Florianz are skilled purveyors of emotive atmosphere, often recording or improvising music live and committing the finished work to CD for release. Molenstraat is just such a project, recorded through the night as darkness falls through to when light slowly returns, the album captures the mood and ambience of the scene perfectly. Slowly and deliberately each track unfolds, gradually painting a picture of the surroundings. Add to this field recordings from the actual street itself capturing life as it happens and Molenstraat provides a snapshot of a night in the life of an unnamed person living on a street in The Hague. So thought provoking are these tracks that the listener can imagine themself standing at the window of the apartment glass in hand, bathed in moonlight and deep in thought watching the street below as the time passes.

Reflecting the slow onset of night each track subtly shifts in mood, starting quite light and optimistic then becoming increasingly solemn through the night before lightening again with the arrival of dawn.

Molenstraat 16:30 opens the CD with the sound of voices, traffic and general activity from the street with a poignant piano motif and gentle dream-like drifting synth backdrop. People go about their business and return to their homes before night falls.

Molenstraat 17:42 is altogether darker and more reflective, the activity and noise from the street outside almost gone and night has arrived.

With Molenstraat 19:28 the mood switches to regret and then anger, a keyboard tone being prominent, the odd piano key reflecting sadness and a slow industrial grind illustrating anger.

Molenstraat 22:52 is the shortest track on the album - clocking in at about a minute and a half - but represents a slightly more optimistic air to a still doleful atmosphere.

Continuing in this vein of a more upbeat theme, Molenstraat 01:37 continues to purvey a more positive atmosphere while Molenstraat 02:28 is considerably more relaxed and flowing.

Molenstraat 07:33 closes the CD in a similar way to it's start with the first signs of activity appearing on the street and the good feeling the dawning of a new day and new start brings.

The Molenstraat album is like a journey through a random person's night alone in an unnamed apartment skilfully portrayed through the representation of mood in the onset of night and the dawning of a new day. Starting reflectively, Molenstraat seamlessly shifts from dark desperation and depression through to hope and determination for a new day. All this created through the use of carefully placed piano and swirling keyboard tones along with the use of space and naturally occurring ambience from the surroundings.

A brilliantly emotive album that takes it's time to unfold and paint a picture of mood and feeling on both a personal and environmental level.